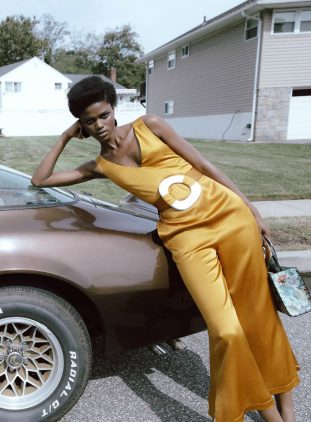 Imade has appeared on magazines such as Vogue Italia, Vogue Uk, Jalousie, The Factory Indie Magazine Editorial, Street Appeal Interview Magazine, Tale Of City Portrait, King Kong Magazine, W Magazine and WWD Magazine,  and a shoot she recently did in the Canary Island. Added to her wall of fame is her feature on Gucci making her the very first West African Model to achieve this. She’s worked with Edu, New York based Designer Mulhier, New York designer TOME NYC, Vivienne Westwood and Weiz Stuartman the legendary Shie brand, Stuartweitz that is the legendary show brand, Stella Jean in Milan, Iralian designer Mario Dice, Adam Selman, African Designers Stepania Moreland, Susan Heynes, Deola Sagoe, Clan, David Tlale, Khosi Nkosi, Marianne Fassler, Gavin Rajah, Taibo Baca of Mozambique, Italian designer Mario Dice.
She has graced the runway of Africa International fashion week during the Vogue Talent for Africa, Lagos Fashion and Design week and Ecowas Fashion week. She was one of four models who were nominated at the Mercedes Benz fashion week 2014 as most likely to make it in the world, they were right. At that event two winners of Nigeria’s Next Super Model were nominated and Favour Lucky won.

Imade Ogbewi, 179 cm / 5’10.5″, Nigerian, born May 28th originating from Benin, Nigeria was discovered in Lagos Nigeria in 2011 by ISIS Models Africa through the agency modeling contest – Nigeria’s Next Super Model. Prior to this time, she was a student at the Universite of Lagos Nigeria. Her journey to stardom kicked off that same year when she emerged as the winner of the contest with Deon Redman, Regina Jire the editor of Africas biggest fashion Magazine, Remi Diagbare making the panel of judges and was given a brand new car and a modeling contract with the mother agency. This launched her on the modeling runway and as a natural-born model and a beauty queen, she unleashed her embedding passion for modeling and the fashion world took notice of her “runway magic”. Imade trended in the same year 2011 as the busiest model in Nigeria. She quickly became photographer’s favorite and fashion designer’s delight as she graced several runways on international platforms. Her trip to South Africa was the first, and then to The Gambia, then to London and that was it… she’s unleashed!